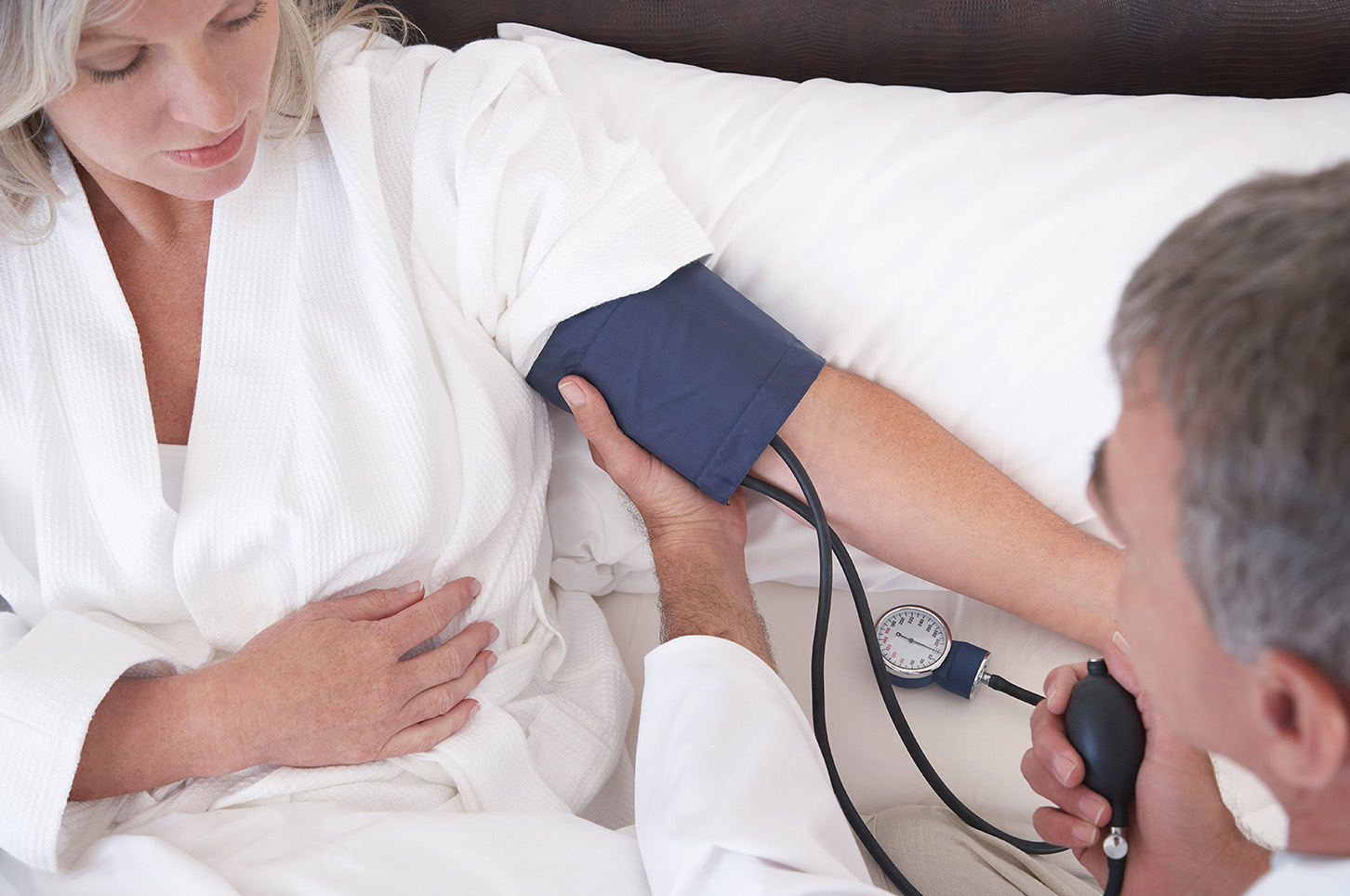 Tale of the Day:
Bringing extreme blood pressure back into balance.

Diane came to me in late October of 2012 because of dangerously high blood pressure over the previous ten months. Her doctor had put her on medication (Labetalol) in an attempt to bring her blood pressure into the normal range, but even so her systolic blood pressure would spike nearly every afternoon, reaching as high as 210, and requiring additional emergency medication (Clonidine). An average of her highest reading each day over a period of four months was 181.

Diane told me she’d been living with a lifetime of anxiety resulting from being abused as a child. Traditional medicine and other disciplines were not working for her. We started meeting once a week, working together to transform and resolve each aspect of this issue. Her life was on the line, so it was important to work with this thoroughly. Each weekly meeting we took another step toward resolving issues from the past, changing ways of responding to stress in the present, and discovering/exploring how the new Diane wanted to organize her life for the present and future. After just one month, the highest reading of her systolic blood pressure each day came down to average 155 over the next 76 days, and soon she didn’t need the emergency med at all. We transitioned into meeting once every two or three weeks (with her doing NLP work on her own in between sessions). Things continued to improve for her, even during the Colorado flood which forced her out of her home and prevented us from meeting for two months. She recently gave me her average for the same 76-day period one year later (again using her highest systolic reading each day) and it was down to 134. She achieved an overall decrease of 47 points in her systolic pressure.

A psychiatrist colleague of mine asked whether Diane’s diastolic pressure had also come down. He wrote me, “The top number (systolic) is the one most immediately reflective of anxiety and of treatments for anxiety. Over the course of successful treatment of anxiety, the cardiovascular system would have less impact of the sympathetic drive and corticosteroid production that accompany stress and anxiety. So both numbers would hopefully decrease. The bottom number (diastolic) is the resting pressure of the system.” I asked Diane if there had also been a decrease in her diastolic pressure, so she calculated an average for the first 90-days we worked together, and another average for the same period a year later (the time of the flood when she was forced out of her home). The results were just as dramatic for the resting pressure of her system, which went from an average of 96.2 to 68.5, a 27.7 decrease (an even greater decrease by percentage than her systolic pressure).

A huge factor of Diane’s success has been her full engagement in using the NLP tools I taught her, and her use of them on her own between sessions. Below I describe what happened in my first session with Diane, as I taught her a very useful NLP tool as a first step. Try it out yourself for any area of your own life where you feel overly worried or anxious.

When Diane first met with me, after I got to know her a bit I asked her, “What is the first thing you want to change?”

I asked her if she was experiencing any anxiety right now. She said just a little bit. I asked her, if she felt comfortable doing so, to close her eyes and put herself back into a time when she felt the anxiety more than a little bit. I noticed her neck tighten and her face tense.

“And where do you experience the feeling of anxiety?” I asked. She said it was like a tight lump behind her breastbone. I asked her to tune into the sensation of the feeling and notice more details. “Where does it start and where does it go to?” I asked.

After a few moments she said, “It’s like it comes in through my nose and goes down into my chest and compacts right there.” (She gestured over the center of her breastbone).

“OK, great awareness. The feeling of anxiety goes in through your nose and down to compress in your chest area. This is the path of the feeling. Now, my next question may sound strange, and that’s because it is. As the feeling starts in your nose and goes down to your chest area, does it spin clockwise or counter-clockwise along this path?” To be extra clear I invited her to open her eyes as I gestured with my hand in front of my own body, showing the two options.

“Looking down from the top of my head, it goes counter-clockwise,” she said.

“Great, now close your eyes again, and notice the feeling in this counter-clockwise spin along the path starting at your nose and going to your chest.”

“Actually it doesn’t stop in my chest,” she said. “When it hits my chest it goes back up and out my mouth. It’s like it goes in my nose, spirals down like it’s compacting coal in my chest, and then the feeling comes up out my mouth leaving my chest all compacted.”

“Great awareness. So now, as you notice the spin along the path from your nose down to your chest and up out your mouth, you can allow the spin to begin to slow. Notice what happens when you allow the spin to slow a little more… [slowing my voice] until eventually… it will just stop for a moment… as if in limbo. And then it begins to spin in the new direction along the same path. Coming in through your nose and spinning in the new way down to your chest area and back up out your mouth. It can even speed up faster with this new spin, and then settle into the speed that’s most comfortable. As it does this you can notice if it would like to shift to a more comfortable color.”

At this point I could visibly see Diane’s neck and face relax, and she started taking bigger, deeper breaths. “Wow,” she said. “Now instead of compressing more coal down there, it’s like the new spin is sending down buckets that are digging up the coal and tossing it out my mouth!”

“Go ahead and give yourself as much time as you like to experience this new way, as things are decompressing,” I said.

After several minutes she took a breath, “I have a sense this is going to take a while.”

“That’s just fine. Now that it has this new direction, it can continue to operate with this new twist as long as is useful. Now, ask inside, ‘Is there any part of me that has any objection to having this new experience in place of the old anxiety?’ ”

After a few moments she said, “No. This is amazing. Now I realize my life has been chaotic and feeding this. I can change that.”

“Wonderful. Now, because all of you is happy to have this new way of being, you can imagine a future situation in which you used to feel the old anxiety. Go ahead and imagine that, and notice how it feels now.”

She closed her eyes and stayed visibly relaxed.

“Great, now imagine another couple of situations, one at a time.”

She nodded when she’d finished.

“Now, it’s important to realize that this isn’t a process to use on your symptoms just like another drug,” I told her. “Some people use it that way and just get even more out of balance, continuing to do all the things that stress them out because they can get away with it for a little while longer. But there ends up being a high price. We don’t want that. Instead you can use this as a process to tune in more and more to the natural and important feedback your body is giving you about what it needs, such as the important feedback you already got about making your life a lot less chaotic. Once you learn to completely tune into and listen to your body’s feedback, you won’t need this process at all.”

She opened her eyes and nodded vigorously, so I could tell this made a lot of sense to her.

I invited Diane to practice this spin reversal process as a meditation each day, such as before drifting off to sleep, and especially to do it any time she felt anxiety starting to come on. I also gave her the task of tuning in more and more to her body so she could start to notice the barest hint of the anxiety. I suggested that once she got good at that she could see if she was able to notice the feeling that comes just before the feeling of anxiety. This way she could start getting the feedback her body was giving her before she ever got to the level of anxiety.

Note: Often people don’t believe this process will work until they try it themselves. Consciously, people often find this process doesn’t “make sense.” But our language reveals our unconscious internal experience all the time. People commonly say they are “wound up” or “spinning out.” Most of them simply don’t realize how accurately they are describing their internal experience. This process is one way to “unwind” and “put a new spin on things.” Email me if you want a step-by-step write up of the process described above.

Book a private session with Mark by visiting www.markandreas.com
Click here for Mark’s next training.