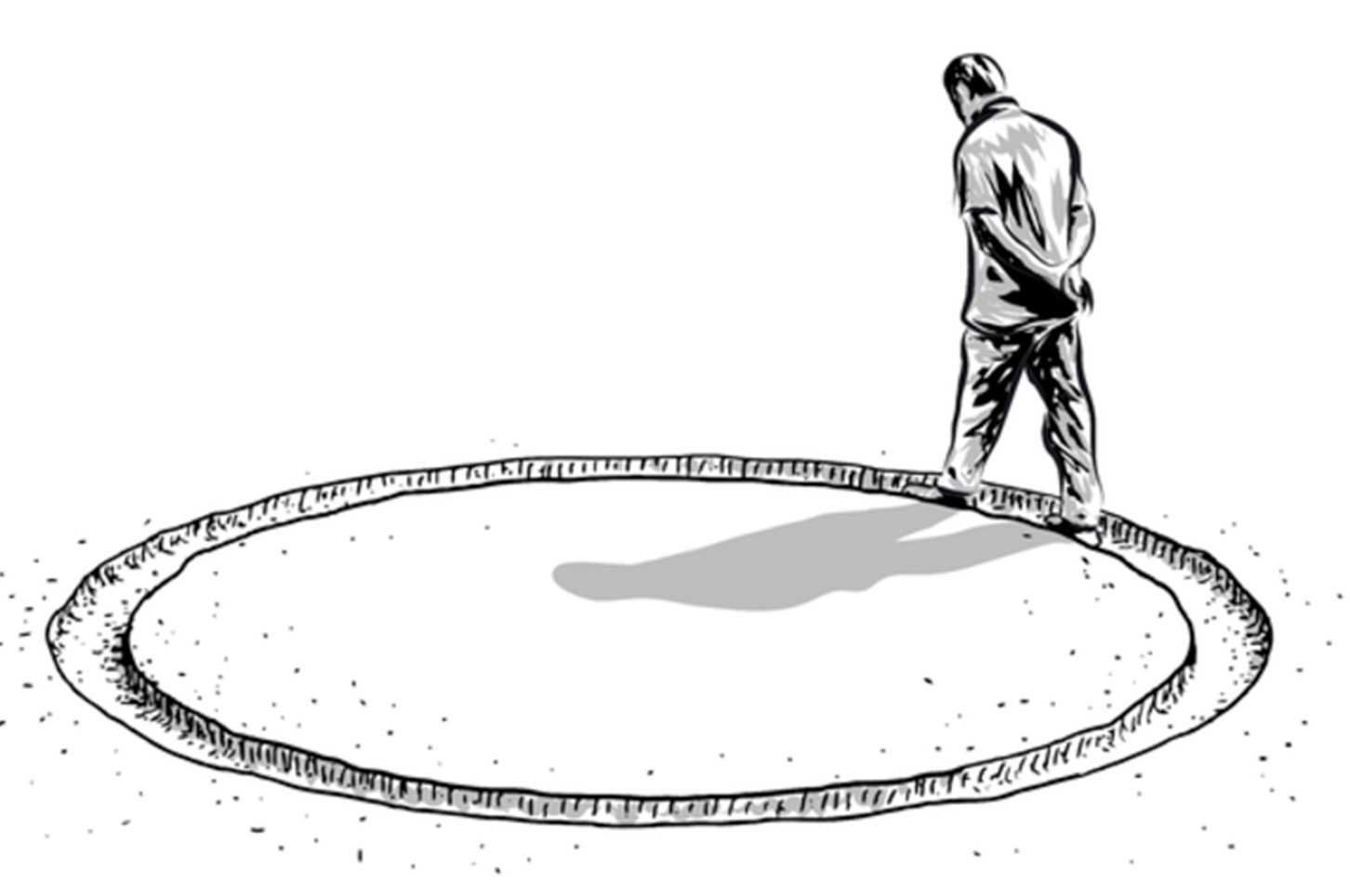 02 Oct Pacing with Metaphor: (how to be clairvoyant)

Tale of the Day:

I recently presented a fascinating and very unique new way of working with metaphor at the American Council for Hypnotist Examiners (ACHE) Conference in Pasadena, CA. I received a lot of positive feedback on the presentation, and had a great time exploring metaphors as a group. Below is one example from the stories I shared of my experience using the Metaphors of Movement method, developed by Andrew T. Austin of the UK.

I asked a client not to reveal anything about his problem. All I asked was, “the whole thing, the whole big mess, what is it like?”

“And what are you walking on?”

“It’s like I’m in the middle of no-where, walking in circles on a concrete slab. And it’s like there’s this river behind me, but it’s come to an end.”

I drew a picture of what he had described, and I repeated back anything that I literally saw going on in the picture.

“Well,” I said, “It looks like perhaps you’ve gone with the flow for a while, maybe for a long time, and while there may have been a certain sense of ease in that, being carried along, even buoyed up, perhaps you also got a bit carried away. Because as long as you are in the flow, as nice as it might feel, you don’t have much control over where you are going. And now you’ve washed up here in the middle of nowhere, and for the first time you have to support yourself, you have to carry your own weight. And to make matters worse, you don’t know where you are, or which direction to go, or rather you know exactly where you are: in the middle of nowhere. But there is good news, and that is that you finally have a concrete place to start, you’re a lot more grounded here, and for the first time in a long time you’re able to take your own steps to go in a direction you choose. It’s just that you don’t know what way is the best way to take yourself forward, so the steps you’re taking are pretty counter-productive, you’re really going nowhere, just re-tracing the same ground you’ve been over again and again. But what’s absolutely clear is that if you’re in the middle of nowhere, and you want to be somewhere else, you’re going to have to choose a direction, any direction at all, and stick to it. And it’s going to take a lot of steps.” Then I asked, “Is that about right?”

“That’s incredible,” he said, putting his hands to his temples, “it’s like you’re clairvoyant!”

But he never told me what the problem was.

I have many stories of tuning into a client’s metaphor to gain deep rapport with them even if I know nothing about the real-life content of their problem. Andrew T. Austin’s Metaphors of Movement process is an elegant tool that allows us to have an embodied awakening to where we are beginning. Once we know that, we might not like it, but we can decide if it’s worth the effort of taking the steps necessary to get to somewhere we like better. And many people do take those steps, on their own, rather than keep looking for the solution outside of themselves.

Stay tuned for a fascinating story about the results clients get from this way of working. You can set up a metaphor session with Mark Andreas here.

Tool of the Day:

1)   Notice a metaphor you use automatically, such as “I’m stuck in a rut,” “I’m banging my head against a brick wall,” “I’m in the pit of despair,” “I’m treading water,” etc. OR, think of a place where you feel stuck or blocked and ask yourself, “This whole thing, the whole big mess, what is it like?”

2)   Notice more of the metaphor, what’s left, right, front, back, up, down. (What are you standing on? What kind of wall are you banging your head against? Etc.)

3)   Get in brainstorm mode and repeat back literally what you see in the metaphor, paying special attention to common idioms that arise (such as “going with the flow” “grounded” “taking steps” etc.

4)   Now you have a more detailed metaphorical experience of where you are beginning. If we want to get somewhere different, we first need to know where we are beginning, and we don’t all start at the same place. Notice how you’ve chosen to position yourself in the metaphor. Now that you think about it, how else might you position yourself? What is the first step you might take? What is the direction you want to go? Don’t change the metaphor.